Solidsport Broadcast is themost downloaded sport streaming app in the Nordics. The app is very easy to use and completely free to download through the App Store or Google Play.

In this part of the Streaming School, you’ll learn everything you need to know about Solidsport Broadcast and how to use its most important features. The goal of this course is for you to learn how to broadcast sports with a smartphone or tablet.

To be able to complete this part of the Streaming School you first need to download Solidsport Broadcast on your smartphone or tablet. If you haven’t already done it, you can do so now from the links below. It’s completely free of charge.

In order to log in to the app, you need a user account on Solidsport. If you don’t have an account already, you can register it here. The account also needs to have admin permissions to the Solidsport channel you’re going to broadcast on. When you create a new channel on Solidsport, you automatically become the administrator of the channel. If you don’t have the appropriate permissions, you need to contact your channel administrator and ask for an invitation to your user account.

As soon as you have the appropriate permissions, you can log in to Solidsport Broadcast with your user account. Once logged in to the app, you will then see a list of upcoming games for the team to be broadcasted. If the list is empty, you first need to create a match and enable live broadcast for the current match. You create the match through from the admin section on your channel. For more information about creating games and activating live broadcasts, see the previous part of the Streaming School. Then select the correct game from the list and then click “Broadcast Now”.

Now you have activated the broadcast mode in the app. If you’re in before the game starts, you’ll see a count down clock. The countdown shows much time it’s left until the broadcast goes live. If you don’t see a countdown, it means that the broadcast is already live. Meaning, you don’t have to do anything to get the stream live towards the viewers. This happens completely automatically when the time has counted down.
If you want the broadcast to go live before the countdown is completed, press the “Broadcast now” button in the center of the screen.

Below you can see an image with descriptive text for the different features of the app that we go through further down the page. 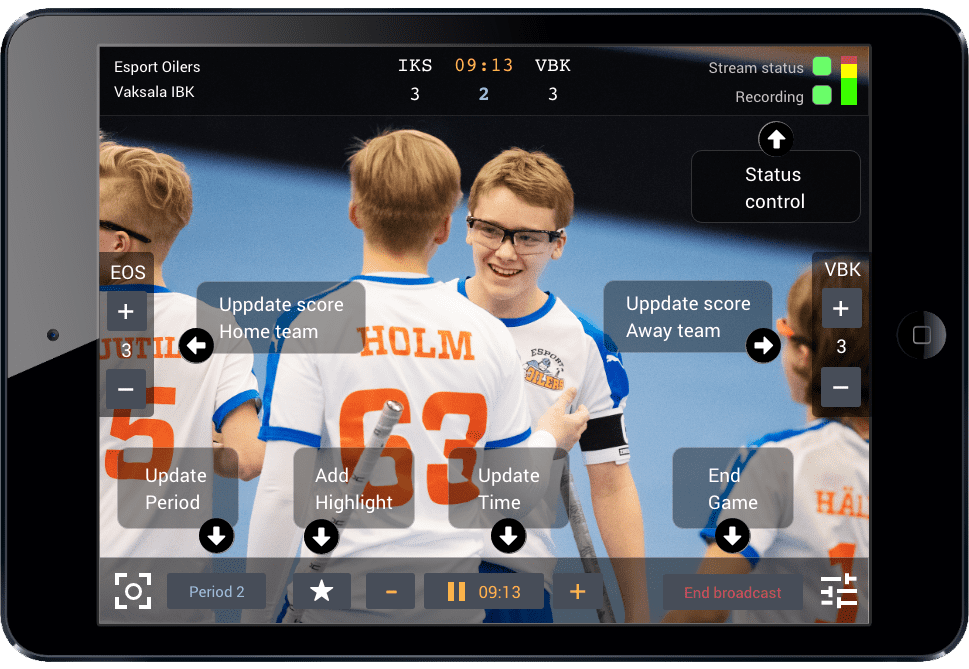 Update graphics in the broadcast

On the right and left of the app you will see buttons with pluses and minuses. These buttons are used to update the goals of the home and away team. The score of the game is then shown in the graphic during the broadcast and in the replay.

Similarly, you can update the game clock, period and half and these settings can be found at the bottom of the app.

When the game is over, it’s important that you press the “End Broadcast” button. When you have done that, the broadcast will be automatically converted into a replay, making sure that the game can be watched afterwards.

Perhaps the most appreciated feature with Solidsport Broadcast is the possibility to create highlights. At the bottom of the app you will find a star icon button. With the help this you can create highligts of everything from nice saves, spectacular dribbles to nice goals and other things that you think is a highlight.

Each time you press the button, a video sequence of 10 seconds is saved. When the game is over and the broadcast has ended, all the highlight sequences are merged into a highlight video. It’s then automatically published on your Solidsport channel.

To see how the highlights feature works, see the video below.

Improve the image by focusing

A sharp image with the right light is important, both for the person filming and the viewer. Generally speaking, what you see on the screen when you broadcast is the image that viewers will se as well. In other words, if the image is blurry when filming, the image will also be blurry for your viewers. The easiest way to get a sharp image with the right focus is to tap once on the screen. Tapping the screen resets the sharpness and focus, making the image better for both the broadcaster and those who are watching. 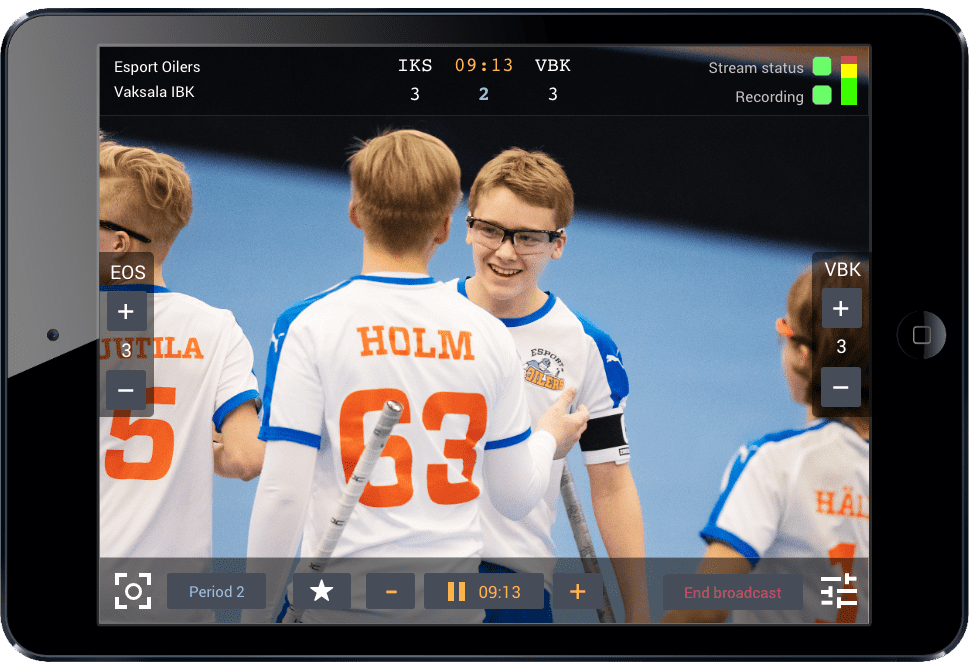 In the left corner of the app, there is also a square box. Clicking on it will set up several settings options, including focus and exposure. You usually don’t have to touch these settings. However, there is a function for zooming. You’ll find a zoom slider on the right side of the screen after you tap the square box in the lower-left corner.

Learn more about how you can use the zoom slider in the course “How to make a good live broadcast“.

Important: Remember to update the period, goal and clock during the broadcast and follow the game through the screen. Then you will secure a great experience for the viewers.

Congratulations - You are now ready to start broadcasting

Now you’ve got a quick walkthrough on how to live stream sports using Solidsport Broadcast. Do you still have any questions? Contact us fron the help form and we will get back to you as soon as we can.

In the next part of Streaming School you will learn our best tips on how to make a good live broadcast. To move forward, click on the link below.

How to produce a good sport broadcast >

Solidsports was founded with the vision of enabling all sports at all levels to broadcast their sport live.

With the help of live sports at all levels, Solidsport wants to convey excitement and joy while creating new revenue for sport. With our services, we also want to contribute to the development of players and coaches, inspire more sports and at the same time contribute to a better society where more people move and more people are healthy.

We use cookies on our website to give you the most relevant experience by remembering your preferences and repeat visits. By clicking “Accept”, you consent to the use of ALL the cookies.
Cookie settingsACCEPT
Manage consent

This website uses cookies to improve your experience while you navigate through the website. Out of these, the cookies that are categorized as necessary are stored on your browser as they are essential for the working of basic functionalities of the website. We also use third-party cookies that help us analyze and understand how you use this website. These cookies will be stored in your browser only with your consent. You also have the option to opt-out of these cookies. But opting out of some of these cookies may affect your browsing experience.
SAVE & ACCEPT